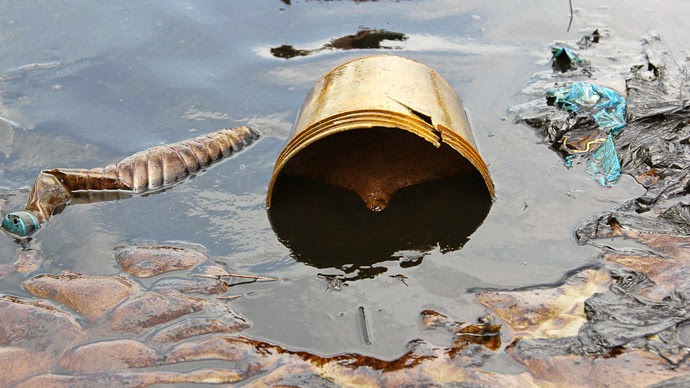 The Niger delta has experienced another oil spill from one of Shells pipelines. Local environmental activists have said that it ranks as one of the worst in Nigeria for years.

The late November spill happened in Okolo Launch on Bonny Island. According to an investigation by shell and government officials 3,800 barrels have spilled recently, but 1,200 barrels had been recovered as of Tuesday.

In spite of efforts to manage the spill, vast quantities of oil have reached the shore and have started to have an adverse effect on the fragile ecosystem. "We saw dead fish, dead crabs ... This spill occurred 7-8 nautical miles from the shore ... so the volume runs into thousands of barrels," Alagoa Morris, head of the Niger Delta Resource Center for Environmental Rights Action

20 million people and 40 different ethnic groups inhabit areas of the delta, it is the largest wetland in Africa and contains one of the highest concentrations of biodiversity on the planet. The unique ecosystem also has more species of freshwater fish than any ecosystem in West Africa.

Shell has placed the blame for the spill on failed crude theft, and claims that over the last five years 70 percent of all oil spills have been the result of sabotage.

However, Shell has recently been held accountable for the environmental damage caused by a 2011 oil leak in the offshore Bonga oil field, this incident saw nearly 40 thousand barrels of oil drained into the sea. The Nigerian parliament determined that Shell must pay nearly 4 billion dollars (3.2 billion euros).

In a recent investigation Amnesty International revealed that Shell has repeatedly made false claims about the size and impact of two major oil spills at Bodo in Nigeria that happened back in 2008. The aim of the company was to minimize its compensation payments for the damage caused to 15,000 people whose livelihoods were devastated by oil pollution. In a high-profile compensation case in England’s High Court, Shell did confirm that the two spills had been far greater than the previously believed. Yet Shell did not give a revised figure, which now stands at 4,144 barrels.
Posted by The Five Estates at 14:04