We’ve heard of Global Warming, but what the hell is Global Dimming? 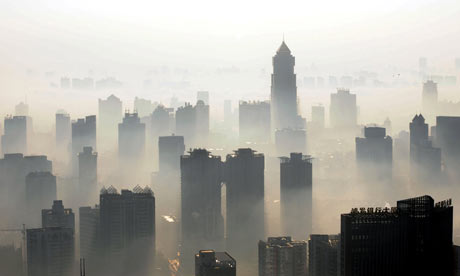 We should all now be aware of the concept of climate change. Not only has it become part of mainstream science but its claim to impending global catastrophe has given the theory a very distinctive role in mainstream politics. We have been taught that the increase in atmospheric CO2 produced by man-made and natural causes has the potential to prevent solar energy from escaping into space, resulting in higher global temperatures known as the greenhouse effect. The theory of global warming is accepted worldwide; encouraging businesses to take corporate responsibility for their carbon emissions and has been a catalyst for international organisations such as the Center for Climate and Energy Solutions. What we pay less attention to is the other climate phenomenon that appears to be opposing the effects of Global warming.

The particles released into the atmosphere from centuries of burning coal, oil and wood have combined with water droplets in clouds; by acting as a base the airborne particulates made up of soot, ash, and sulphur compounds encourage more water droplets to form in clouds.

The clouds formed from the particle and water droplet combination have been slowly reducing the amount of sun that reaches the earth’s surface by reflecting solar rays back into space. This is happening at a rate of roughly 2% every 10 years.

Global dimming was first discovered by Gerry Stanhill, an English climate scientist carrying out research in Israel. Stanhill was comparing Israel’s recordings of sunlight in the 1950s with more recent ones. Stanhill found that there was a decrease in sunlight by 22%. He published his research in 2001 but other climate scientists were sceptical of his results. It was not until years later when a team of Australian scientists confirmed Stanhill’s findings when they reached the same conclusions using a different method.

Experts in climate science have not been able to rule out that natural weather variations have contributed to global dimming, but there are strong correlations between the intensity of cloud cover and trends in atmospheric pollution.

In some locations such as Lerwick, UK no dimming has been recorded whereas continuous dimming has been observed in Hong Kong. Industrial activity in the UK diminished a number of decades ago and the vast majority of Industry relocated to countries like China and India.

Although the two climate processes have so far been apposing each other. Global dimming is a danger to us. Anup Shah who writes for Global Issues wrote “The pollutants that lead to global dimming also lead to various human and environmental problems, such as smog, respiratory problems, and acid rain.” The reflective clouds produced by global dimming shield the oceans from the sun’s radiation, making waters in the northern hemisphere much cooler. Cooler oceans mean less water evaporation and, in a cruel twist of irony, the poor water evaporation generates a reduced amount of water vapour. Global dimming may be disrupting global weather patterns and is likely responsible for the 1970s and 80s African droughts which claimed hundreds of thousands of lives.

"My main concern is global dimming is also having a detrimental impact on the Asian monsoon . . . We are talking about billions of people." Prof Veerhabhadran Ramanathan, one of the world's leading climate scientists.

The dimming effect of increased cloud cover is likely to be cancelling out a proportion of the greenhouse effect introduced by growing global CO2 emissions.  However as the international community has encouraged the reduction of pollutants, the shielding effect of global dimming will also be reduced and the planet may begin to observe the greatly amplified effects of global warming. Many countries in Europe have taken steps to reduce their pollutant producing emissions, but reducing air pollution may have tipped the scale in Global warming’s favour and resulted in the 2003 European heatwave. The surge in temperatures created forest fires in Portugal and killed thousands in France.

In short, the burning of fossil fuels and a geographical shift and intensification of industrial activity has contributed to two unstable environmental phenomenon; global warming and global dimming. The two have mostly cancelled each other out, but if climate science and international policy are to combat one they must combat both or we risk further upsetting the balance and causing irreversible damage to the planet and our way of life.