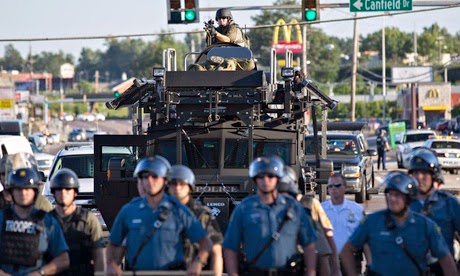 Demonstrators clash with Police in Missouri

Hundreds marched through the streets of Ferguson in Missouri demanding justice for the Police shooting of an unarmed 18 year old male. Police have withheld the name of the office involved with the shooting. Michael Brown was shot and killed by a police officer on Saturday in a Ferguson suburb.

Police officers equipped with riot gear and assault rifles cracked down on the protesters when glass bottles were thrown from the crowd on the fourth night of demonstrations. Police used tear gas and military-style tactics to disperse crowds and arrest a number of people.

Reporters from the Washington Post and the Huffington Post were among those arrested. A camera crew from al-Jazeera America said they were shot by rubber bullets.

Many other demonstrators were shocked at the excessive force used by the police. One protester said “This amount of force was unwarranted. This is an abuse of force. No one is firing guns at them or running at them. This is an overreach.”

Jay Nixon, Governor of Missouri has handed policing responsibility of the protests over to the Highway Patrol. Protesters have responded to the “softer front” of the Highway Patrol and tensions have died down. Although removed from protest duty St. Louis County Police have been tasked with investigating the Death of Michael Brown.
Posted by The Five Estates at 12:56