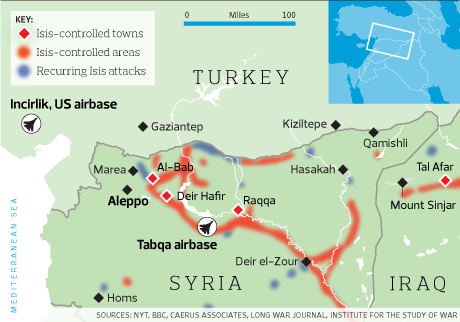 The Islamic State has set it's sights on expansion

The Islamic state has pushed to secure the border between Turkey and Syria to act as a gateway for its recruits to enter the Caliphate. The Turkish government is being pressured by British politicians to put a stop to crossing of new Islamic State recruits. Islamic state fighters have begun to move up from Syria towards the Turkish border. They advance in columns of armoured trucks that were looted from abandoned Iraqi military bases.

Dr Hisham al-Hashimi, an Iraqi expert on Isis said "If [the Turkish border] is closed, it will cut three things: funding, an entrance for the foreign fighters and links to Europe which they are trying to open. If those plans are destroyed, they will aim for another gate to Lebanon." Islamic State fighters withdrew from areas north of Homs and have travelled east after a battle between themselves and Nusra Front, Syria’s branch of al Qaeda. The Islamic state has found opposition with western backed fighters in Syria and Iraq and also other Islamic militants like Nusra Front.

The paramilitary wing of the Kurdistan Worker's Party (PKK) - which was once declared a terrorist organisation by the U.S. - is now fighting alongside soldiers from Iraqi Kurdistan known as the Peshmega. The two forces along with U.S. air support have been successful in slowing the advance of Islamic State forces in some areas in Iraq.
Posted by The Five Estates at 14:29