A Guide to Legitimate Descent 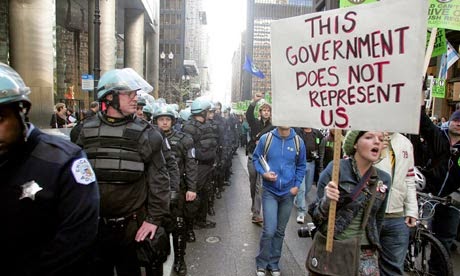 Protests are used as a means to voice an opinion that may otherwise go unheard. Demonstrating in the street is not the only way to achieve this goal. Some people prefer to use music and the arts to get their point across. Others, such as myself, use the written word but it really doesn’t matter what median you choose as long as it is effective and authentic. Our world needs people to express their opinions, it is an essential part of any human society because it is a means for change, and like good Heraclitus said “The only thing that is constant is change.”

We now have unprecedented access to the internet where we can sign e-petitions, join all manners of message boards, and participate in group discussions on social media websites. But nothing makes a statement like 100,000 people parading through the heart of a city holding pickets covered in colourful slogans, while chanting, and pissing off the regular commuters. You may be reading this thinking back to a time when those damned protesters disrupted your travel plans, but that’s kind of the point. You are supposed to take notice. How else are you going to find out that this many people oppose David Cameroon’s latest ridiculous policy? From a biased news organisation that has its own agenda (Future proprietors, don’t let this affect my employment chances)? If it does nothing else it makes you wonder, if these people feel so strongly about it that they are willing to call in sick to participate, than maybe not everything is as it seems.

In most countries there is no law banning the peaceful assembly of a group, there may be instances where activist groups are asked to inform the authorities if they are planning a demonstration, but I always figured that these are situations of "We are informing you as required, but this is going ahead whether you like it or not." unless there is a potential for a major public disturbance than the right-to-protest point of view should very well be exercised.

What about when a protest group is confronted by an opposition group? Surely both sides have the right to voice their opinions, but this meeting of the minds contains within it the potential for violence. In these instances it might be reasonable to disperse an opposing group. This would not be a breach of their right to assemble but a precaution to avoid a very dangerous situation. There have been occasions where attempts to separate groups with opposing ideals have been unsuccessful; The English Defence League often come up against United Against Fascism but of course both groups have a right to voice their opinions; the Euro maiden demonstrations in Ukraine that managed to oust former President Viktor Yanukovych later met resistance against pro-Russian groups and has now escalated into a bloody civil war.

On many occasions in the last decade, we have seen a number of struggles reach a point where violence increases on both sides and the stakes are dramatically raised. The intensification turns one side into rebels, freedom fighters, or terrorists depending on their political alignment, and bears characteristics common with rapid destabilization of social services, infrastructure and a peaceful way of life. The Arab Spring was triggered by Tunisian fruit vendor Mohamed Bouazizi, who set himself on fire after harassment by government officials. The region wide conflict that followed has shown us what can result from a socio-political movement given the right atmosphere.

After witnessing the events of the past few years it is quite clear that demonstrations can go very wrong (or very right depending on your perspective), however the examples discussed cannot be used as justification to take away a person’s right to seek alternatives. The examples definitely do not justify law enforcement treating demonstrators as criminals. During the Toronto G20 in 2010 over 1000 people were arrested for various disturbance charges. 1000 arrests make it seem like the protesters were breaking all kinds of laws but it turned out that only a few dozen were actually convicted. This sounds more like Marshall Law rather than police upholding order.  Do the Police have the ability to enact Marshall Law in times of mass protest? Some authorities seem to have the ability to call an act into effect when they feel it is necessary. So the evidence would point to a possible yes.

An example of this would be during the 2011 demonstrations in Montreal, when on many occasions the police chose to call the assemblies unlawful and went on to threaten that if the crowd did not disperse participants would be arrested. What the police failed to realise was that these people weren't going anywhere, and they knew the Police did not have legitimate grounds for arrest, so instead the authorities adopted tactics of violence and intimidation. The protesters acted in kind.
Before you misunderstand me, this is no anti-law enforcement rant. In a lot of cases, police have no choice but to use violence on protesters. Now that isn't because they must match violence with violence, but it’s due to the orders that have been passed down through the chain of command. Intentional intimidation is the state’s response to large groups of people who are preaching an alternative way of life. The suppression of change is a way of maintaining order, and it is done by downplaying a demonstration as a rabble of angry hooligans with nothing better to do.

Don’t ever be afraid to pursue alternatives and ask hard questions. Change has to start somewhere.