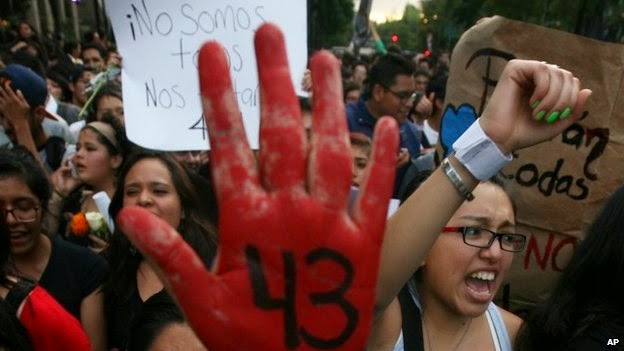 Mexican mayor and wife suspected involvement in disappearance of 43 students

Protesters stormed and set fire to the main government building in Iguala, Mexico on Wednesday as anger continues to mount over the failure of authorities to locate 43 students who have been missing since September 26.

As the attack on the town hall occurred, Mexican federal police forces, which have been in charge of public safety since the September attacks, were nowhere to be found.

Attorney general Jesús Murillo Karam said there was clear evidence that José Luis Abarca, the mayor of Iguala, ordered local police to target the students who are from a teacher training college in Ayotzinapa. The students had travelled to nearby Iguala to protest against what they said were discriminatory hiring practices, and to collect funds for their college.

However, the mayor knew of the student’s intentions and had local police intercept them because he feared they would disrupt a speech by his wife, Maria de los Angeles Pineda. Mr Murillo Karam said police officers testified that they had been told to intercept the students "on the mayor's orders". The local police have been accused of firing upon the three buses carrying the students, killing six. Eyewitnesses described seeing the remaining 43 students being bundled into police cars.

Mr Murillo Karam said the police then handed the students over to a local drug trafficking group, known as Guerreros Unidos, who took them to an area where mass graves have since been discovered. The leader of Guerreros Unidos, Sidronio Casarrubias, was arrested last week and told police that the mayor’s wife María de los Angeles Pineda was the group’s “main operator within city hall”.

Abarca requested leave from his post following the incident on 26 September and neither he nor his wife or the town's police chief, Felipe Flores have been seen since.
Posted by The Five Estates at 16:11