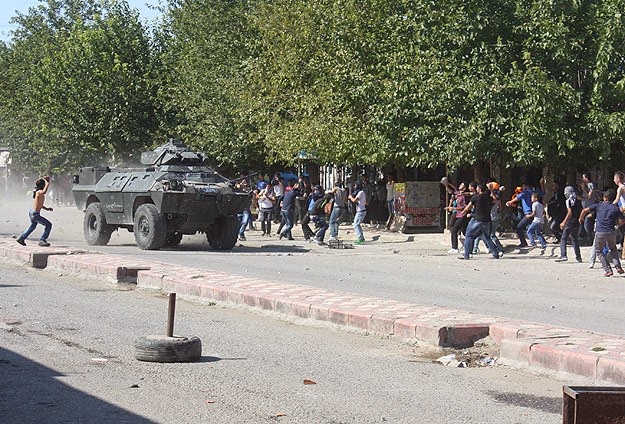 At least 31 people have been killed and 360 others wounded in four days of violent protests in Turkey by Kurdish demonstrators. The demonstrators are frustrated by the government's lack of action to save the Syrian town of Kobane from a jihadist militant takeover.

Police used tear gas, rubber bullets and water cannons against a students in Ankara, namely those protesting in support of Syrian Kurds in Kobani at the Middle Eastern Technical University (ODTÜ) campus and at Ankara University. At least 25 people have been detained. Turkish troops and tanks were deployed to restore order. Curfews were imposed in five provinces.

However, the curfew was broken in the southeastern province of Gaziantep on Thursday night when clashes broke out between pro-Kurdish activists and their opponents. The rival groups attacked each other with pistols, rifles and axes, leaving at least 20 people injured.
Kurdish forces say they have stalled the advance of Islamic State (IS) militants in the town after more American airstrikes overnight.

Turkish forces are standing by near Kobane but the government in Ankara has refused to send them into action, or to establish a safe corridor to ferry fighters and supplies to the besieged Kurdish fighters. Foreign minister Mevlut Cavusoglu commented on the situation "It is not realistic to expect Turkey to conduct a ground operation on its own,"

Washington has suggested that Ankara is not pulling it’s own weight, but the Turkish government resents this. Cavusoglu went on to say that "We are holding talks ... Once there is a common decision, Turkey will not hold back from playing its part."
Posted by The Five Estates at 14:17