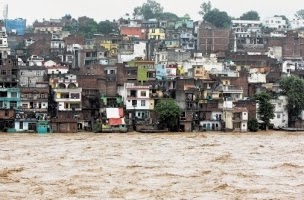 A state of emergency has been declared in Pakistan as the annual monsoon season hits much harder than expected. The torrential monsoon rains have caused flash floods and landslides killing at least 120 people in India and 160 in Pakistan. The disaster has been reported as the worst weather crisis the region has witnessed in six decades.

In Pakistan at least 4,000 homes have been destroyed. Rescue workers and the army are using helicopters and boats to evacuate locals and have set up close to 50 camps to provide temporary shelter.

In India the heavy rains set off landslides, and Dozens of bridges have been damaged or washed away. At least 300 federal rescue workers have joined thousands of state police and soldiers to rescue tens of thousands of people stranded across the region.
Posted by The Five Estates at 11:06