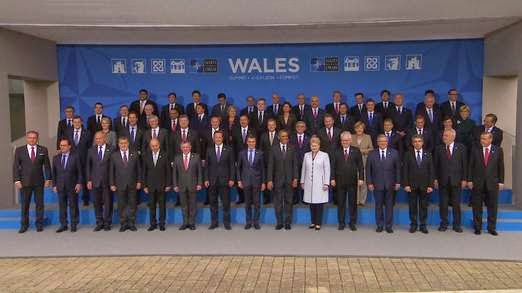 Newport, the third-biggest city in Wales, is this year’s home for the annual NATO summit. Barack Obama, David Cameron and 59 other world leaders will convene in Newport’s Celtic Manor Hotel.
Anti-war protesters were welcomed by the police and were appreciated for carrying out mostly peaceful demonstrations. Memories of violence from previous NATO summits meant police were not taking any chances. Metal barriers were used to prevent protesters from reaching the Celtic Manor resort, and police greatly outnumbered protesters.

An armoured personnel carrier, a tank and an F-35 life-sized model were on display in the Celtic Manor golf resort. A Ministry of Defence (MoD) spokesman said that the displays were intended to showcase British defence capability as well as the country's defence industry.

Eastern European NATO members, including Poland, have appealed to NATO to permanently station troops on their territory to deter possible Russian attack. But not all NATO members agreed with the idea. This is thought to be because of expenses involved and this move would likely breach a 1997 agreement with Russia under which NATO committed to not permanently station large combat forces close to the Russian border. Leaders have agree instead to provide caches of military equipment and resources, in eastern NATO countries with bases ready to receive the rapid reaction force in times needed.

NATO's top official accused Moscow on Thursday of attacking Ukraine, and escalating the conflict. France is to suspend delivery of a state-of-the-art Mistral warship to Russia in protest at Moscow's continued role in unrest in eastern Ukraine. Speaking on the side lines of a NATO summit in Wales, Poroshenko said the ceasefire would be conditional on a planned meeting going ahead in Minsk on Friday of envoys from Ukraine, Russia and Europe's OSCE security watchdog. Poroshenko "At 1400 local time (12:00 noon BST on Friday), provided the (Minsk) meeting takes place, I will call on the General Staff to set up a bilateral ceasefire and we hope that the implementation of the peace plan will begin tomorrow," he told reporters. Oleg Tsaryov, a senior rebel official “in the past we had some ceasefire agreements Poroshenko didn't honour"

Prime Minister David Cameron has warned fellow NATO leaders that they must not pay the requested ransoms to terrorist kidnappers. It comes after he said Britain will not pay a ransom for the UK hostage who Islamic State extremists (IS) are threatening to kill. IS are threatening the life of British aid worker David Cawthorne Haines who has been taken hostage. Nato Secretary General Anders Fogh Rasmussen said: "I do believe the international community as a whole has an obligation to stop the Islamic State from advancing further."

How to stabilize Afghanistan when NATO forces leave at the year's end will also be up for discussion at the summit. Officials have commented that NATO leaders will set up a "spearhead" rapid reaction force, potentially including several thousand troops, that could be sent to a hotspot in as little as two days.
Posted by The Five Estates at 12:43